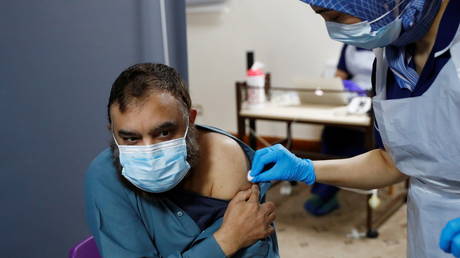 New research commissioned by the British Red Cross has revealed that black, Asian and minority ethnic groups (BAME) are more likely to rely on vaccine information provided by their families than the government or the media.

The charity says vaccine skepticism actually varies among ethnic groups, with Indian (85 per cent) and Chinese (89 per cent) communities having a similar level of confidence in the jab as the British average (87 per cent).

The direct rejection of the vaccine was by far the highest among respondents from black African, black Caribbean or Pakistani communities. People with a black Caribbean background are likely to be skeptical, with 46 percent saying they will not take the vaccine or are unsure.

The survey also showed that 82 percent of BAME respondents who considered themselves ‘vaccine hesitant’ could be persuaded to have a jab if their fears, ranging from side effects, production rate and ingredients, are alleviated.

The publication of the study comes at a time when the UK vaccination program is struggling to develop well, but has been marred by frequent reports of vaccination hesitation in non-white communities.

On Thursday, Queen Elizabeth II spoke out against the vaccine hesitation and urged individuals to do so “Think of other people rather than yourself.”

Give biden a chance? With COVID Aid, some Trump voters could only

Give biden a chance? With COVID Aid, some Trump voters could only

Spain: Cold dirt drops to the temperature of the lowest in 20 years

A key witness to the Lockerbie bombing had a history of “making up stories,” says CIA developer