A police officer was shot dead and two others were injured after a gunman opened fire on Paris’s Champs Elysees on April 20.

The 39-year-old armed man is identified by the papers left in his car, but French officials have not yet released his name.

Local media reported that the suspect lived in a Paris suburb and was regarded as a potential Islamist radical.

The attacker was killed by security forces on the Champs Elysees.

President Francois Hollande is due to chair a security cabinet meeting as France prepares for the April 23 presidential polls.

Francois Hollande said he was convinced the attack was “linked to terrorism”, adding that security forces had the full support of the nation and that a national tribute would be paid to the dead policeman.

ISIL, meanwhile, said one of the “fighters” carried out the attack.

Just before 9 p.m., a car drove up next to a police bus, and the man came out, opening fire on the bus with an automatic weapon, Interior Ministry spokesman Pierre-Henry Brande said.

After the officer was killed, the man tried to escape by shooting other officers, two of whom were injured, the spokesman added.

The attacker was then shot dead by security forces.

During the night, a search of the property in the eastern Paris suburb of Shelley was carried out to find out who else – if anyone – could know about the gunman’s plans.

Paris prosecutor Francois Moline said shortly after the shooting that “the identity of the attacker is known and verified.” 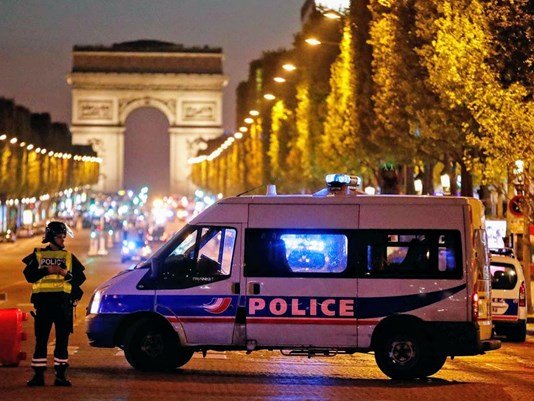 “I will not disclose this, as an investigation and raids are already underway, in particular to establish there is any evidence of complicity (in this attack),” This was stated by Francois Molins, adding that additional information will be published on April 21.

According to French media reports, the gunman spent several years in prison for firing police with a pistol in the early 2000s.

More recently, security services have identified him as a potential Islamist radical.

ISIL, meanwhile, identified the attacker as Abu Yusuf al-Baljiki, in a statement released by the Amaq news agency.

Eleven candidates, nominated on April 23, fought for the presidential election, participated in a final joint televised speech to argue their policies as the attack progressed.

Marine Le Pen, from the far right, wrote on her Twitter: “I feel and support our security forces, which have become a target again.”

Center-right contender Francois Fillon also went on Twitter to pay tribute to the security forces who are giving their lives to defend ours.

Independent centrist Emanuel Macron said in a televised address that it was “the president’s first duty to protect,” and expressed his “solidarity” with police.

Marine Le Pen, Francois Fillon and Emanuel Macron have announced that they are canceling the campaign activities scheduled for April 21, the last day of voting.

Jean-Luc Melenchon, standing from left to left, wrote: “I feel very much about the killed and wounded policemen and their families. Terrorist attacks will never go unpunished, accomplices will never be forgotten. “

Rob Ford returns to work after two months of rehabilitation