Donald Trump cancels a rally in Chicago after violent protests

Donald Trump has decided to cancel a rally in Chicago after protests against the Republican presidential candidate led to violent clashes.

Hundreds of protesters gathered at the University of Illinois at Chicago hours before Donald Trump appeared.

Inside the auditorium, fights broke out between supporters and protesters waving flags and chanting.

A statement from Donald Trump’s campaign said the candidate had decided to postpone the event after meeting with police.

However, a spokesman for the Chicago Police Department said that the forces did not recommend Donald Trump to postpone the rally. 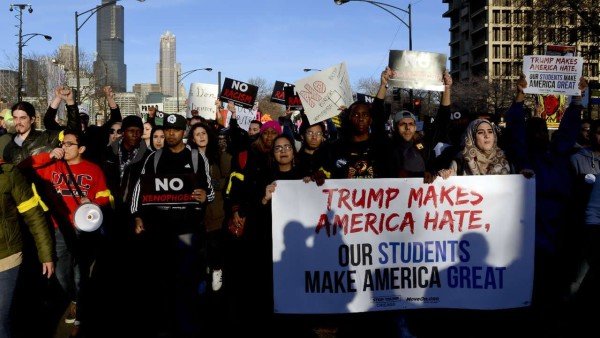 The clashes began more than an hour before the event began and continued after its cancellation, minutes after Donald Trump was due to appear.

There were chants about Donald Trump from his supporters and about Democratic candidate Bernie Sanders from some of the protesters.

There have been several violent clashes sparked by Donald Trump supporters trying to snatch flags from protesters.

A protester had to be physically removed from the scene by a Secret Service agent.

Violent clashes continued outside the scene, and footage from helicopters showed chaotic scenes as police tried to control the large crowd.

The full statement from Donald Trump’s campaign read: “Mr. Trump has just arrived in Chicago and, after meeting with law enforcement, determined that for the safety of all the tens of thousands of people gathered in and around the arena, the rally tonight will be postponed to another date.

“Thank you very much for your presence and please go in peace.”

In an interview with Fox News after the events, Donald Trump denied using hate speech or playing any role in promoting division.

“I represent a large group of people who are very angry.” he said.

“There is great anger on both sides.”

Discussing the decision to cancel the rally, Donald Trump said: “I think we did a very good thing, I think it was a smart decision.”

Harmony of the Seas: The world’s largest cruise ship tested in France

Divine Vaccination: Covid-19 jabs are administered at Salisbury Cathedral to the sound of the ancient organ