Prince Alwaleed bin Talal said on Twitter that Donald Trump must give up his presidential ambitions because he will never win.

This follows the Republican president’s call for the forced refusal of Muslims to enter the United States for security reasons.

“You are a disgrace not only to civil society [Republican Party] but for all of America “ Prince Alualid bin Talal tweets.

“Withdraw from the race for president of the United States, because you will never win.” 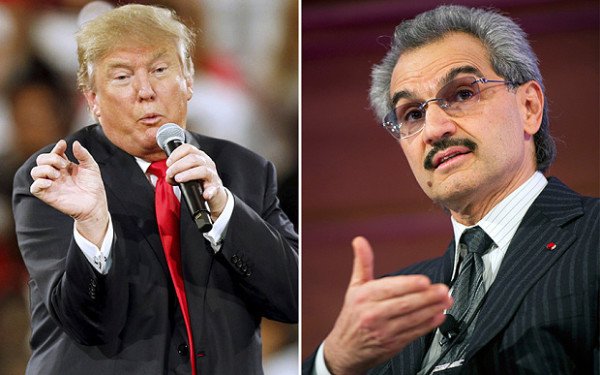 Donald Trump responded by accusing the prince of wanting to use what he calls “Daddy’s Pope” to control American politicians.

That will not happen, Donald Trump said when he was elected.

The real estate mogul has been widely criticized for calling for a ban on Muslims entering the United States.

On December 10, Damac Properties, a Dubai-based company building a golf complex with Donald Trump, removed its name and image from the property.

Donald Trump’s comments came after the shootings in San Bernardino by two Muslims whom the FBI said were radicalized.

Prince Alwalid bin Talal, 60, is the nephew of King Salman bin Abdulaziz al Saud. He graduated in business in California in 1979.

The prince was named the richest Arab in the world in Forbes“A list from 2015, as it costs about 32 billion dollars.

It has stakes in Disney, 21st Century Fox, News Corp, Apple, GM, Twitter and a series of hotel chains and luxury hotels, including Plaza in New York and George V in Paris.

Prince Alwalid bin Talal owns 95% of Kingdom Holdings, a publicly traded company on the Saudi stock exchange. He is considered a Westerner and progressive on most issues. He defends women’s rights and most of his staff are women.