Chinese Uighur separatist Muslims from the northwestern Xinjiang region are accused of a massive knife attack at Kunming Railway Station, in which 29 people were killed and at least 130 wounded, officials said.

A group of black-clad assailants stormed a station in the southwestern city of Kunming and began stabbing occasional stab wounds.

Images from the scene posted online show bodies lying in puddles of blood.

The suspect woman has been arrested and is being treated at the hospital for unspecified injuries, while the search for other people who fled the scene continues.

Authorities described the incident as an “organized, deliberate, violent attack.”

The Kunming city government later said data from the scene indicated separatists from Xinjiang were behind the attack.

There were no details, and the claim could not be verified. 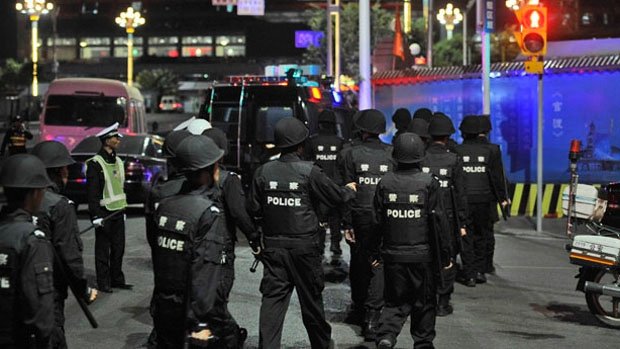 Some Uighur Muslims from the Xinjiang minority want autonomy from governing China and ending the state’s suppression of their religion.

Witnesses in Kunming said those who were unable to escape quickly were hacked to death by attackers.

Survivor Yang Haifei, who was wounded in the back and chest, told Xinhua that he was buying a train ticket when intruders stormed the station.

“I saw a man come right at me with a long knife and I ran away with everyone.” he said.

Initial reports said the attackers were only men, but witnesses and police later said the group included women.

Chinese President Xi Jinping and Premier Li Keqiang sent condolences to the victims and their families.

President Xi Jinping called for “every effort” to investigate the attack.

“Punish violently under the law of violent terrorists and resolutely apply harsh measures against those who are swollen with pride” Xinhua quotes the president as saying.

The incident took place a few days before the opening of the annual parliamentary session of China – the National Assembly of People’s Representatives.

Meet the GOP newbies who take on the Squad.

Music to my worries: One swallows headphones while sleeping